Lyon County is located in the east central part of Kansas with a population of 33,601. At approximately 40×20 miles in size, the county encompasses nearly 844 square miles.

The Lyon County Courthouse is located at 430 Commercial St. in the city of Emporia which is the county seat. 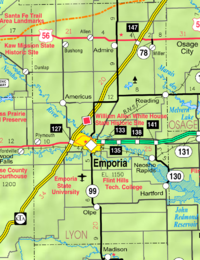 Lyon County has a strong farming community along with some of the following industries:

Four rivers traverse the county which include the Neosho, Cottonwood, Verdigris and Marais Des Cygnes.